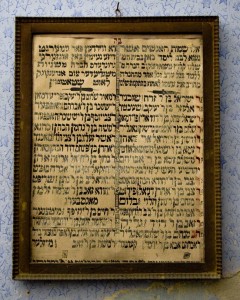 Deed of Foundation for the Mishnah Society at the Chortkover Kloyz

Once known as the Chortkover Kloyz, the shul at Teleki Square #22 was founded by Hasidim from Chortkov, Galicia (today: Chortkiv, Ukraine), who came to Hungary after World War I. Chortkov was the ancestral town of Mayer Amshel Rothschild (1744-1812), founder of the famous European banking dynasty. But the Hasidim who came to Teleki Square in the 1920s could only dream of Rothschild’s wealth. They were mostly poor and pious peddlers, who sold used clothing and other wares at the Teleki Square flea market, barely eking out a living. The kloyz at Teleki Square was one of many small prayer houses in the vicinity of Teleki Square. Kloyz (a Yiddish word derived from the Latin claustrum) is a private house of study, where adult men gathered to learn Torah, Talmud and other sacred Jewish texts. In May 1927, twenty-eight Jews set up a Mishnah Society in the Teleki Square kloyz and they obligated themselves to study Mishnah there every evening. They were Ashkenazic Jews, but like all Hasidim, they prayed according to the “Sephardic” rite that incorporated many of the kabbalistic customs of the sixteenth-century mystic, Rabbi Isaac Luria. To this day, services at the Teleki Square shul are conducted according to the Sephardic style of prayer. Prior to the Shoah (Holocaust), many Jews lived around Teleki Square, and there were dozens of shtiblekh (plural of shtibel, a Yiddish word for a small prayer house) in the area. Some of these shtiblekh were still active in the 1970s and 1980s, but the Teleki Square shtibel is the last of its kind. 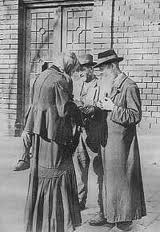