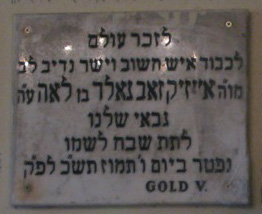 Memorial board in the Shtiebel of Vilmos Gold

“Zeiv Gold, Wolf Gold, Vilmos Gold and Farkas Gold are one and the same person. ”

As the legends goes, the grandfather of rabbi  Tamás Raj (read more in his section) and rabbi Ferenc Raj had an official certificate claiming the above statement.

He was born in 1887 in Tarnopol (today Ternopil in Ukraine) in the vicinity of Chortkov, part of the Austro-Hungarian empire at that time. His exact birth date is not known. He was son of Yitzhak Dovid and Leah Gold, from a rather poor family. He left his birthplace for Budapest in the first years of the 20th century, in the hope of a better life.

A well known figure of the Budapest hasidic community, and of Teleki Square, he was full of life, of joy and the will to live. Being a small shop keeper, selling haberdashery he spent all his life on the Teleki Square market, and came to this little shtiebel to pray.

He was a volunteer chazan and gabai in the shtiebel, singing very typical joyous hasidic tunes.  He led hundreds of shabbat and festival services during his lifetime in Budapest. He also participated in Jewish theater companies and was known as an actor.

He married a wealthier woman, Matild Bolochower (Matl Mirl) daughter of Chaim and Stishe Bolochower. She was born in Sokolovka in a bigger city also near Chortkov on 15 May 1892.  She moved to Budapest and lived her life here until her death in 1977. She was an educated, serious (much more serious than her husband) person.  When she retired, she always read Yiddish books in her free time and organised a n’si: a women’s club for charity.

According to another family legend, one day Matild, the young bride, arrived home crying.
“What is the problem darling?”
“They said, I’m the wife of the funny man.”