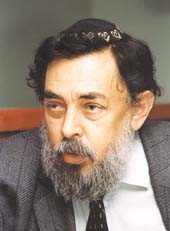 He was born in 9 Februar 1940 near Teleki Square. He was the grandson of Vilmos Gold, member of the Teleki square kloyz. He studied at the József Attila Tudományegyetem in Szeged and the Jewish Theological Seminary – University of Jewish Studies. He functioned as a rabbi in Szeged between 1964 and 1970. Then removed from his post due to a series of police harassments and moved back to the vicinity of Teleki Square. Between 1971 and 1985, he was the the editor of the Publishing House of the Hungarian Science Accademy. At that time he visited Teleki Square Shul to pray, and while not being formally employed, he functioned as the rabbi of the community as a volunteer. From 1985 he was enabled to officially work as a rabbi. In addition, he taught at the Janus Pannonius University, the Jewish Theological Seminary and the University of Miskolc. in he 1990-94 parliamentary cycle, the was a member of parliament as the representative of the Free Democrats (SzDSz). between 1995 and 2005 he was the Judaical director of the Lauder School and he was Director of Maccabi Publishing House.
He was committed to the dialogue between Christians and Jews. Passionate teacher and a great performer. He Talmud Torah (Sunday School) he led, for many children meant the first steps towards the understanding of the Judaism. His numerous works on Judaism retain his enormous factual knowledge.