Memories about the Teleki tér shul (2) 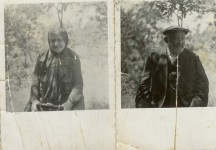 "Here I send with my letter the picture of grandfather Zvi and grandmother Ethel."

As I wrote in my previous letter, R. Gershon ben Yechiel Arie Hahn and R. Hemann Zvi HaKohen Frost arrived to Budapest  in the beginning of the 20th century, and as the years went by, they went praying to Teleki tér from that on all their lives!

I dedicate this letter to my late Grandfather Frost.

Zvi Hakohen Frost was born in Drohobytcz in 1865 and he got married there, and six out of his eight children were born there. I believe he moved to Budapest in 1900 (since both his birth town and Budapest was in the Austro-Hungarian monarchy).

He settled down in the eighth district on the Pest side, and became a clothing merchant on Teleki Square. Thank God, business went on well, and some of his children helped him in his work. His oldest daughter, Szidonia married a distant relative in Köln (Germany) one of his sons, Jossef moved to Germany too, but all the rest remained in Budapest. His youngest daughter, Lea Karolina was born in Budapest)  and she became my mother.

Grandfather Zvi was a very religious (orthodox) man, who joined the founders of Teleki Square Payinghouse with joy. He was seeted next to the Aron Hakodesh till the end of his life (31.12.1939).

I, as the grandson was always happy, to see him being the first getting Alia (Then I didn’t know the reason for this…)

Here I send with my letter the picture of my grandfather Zvi and my grandmother Ethel.